This Weekend Lyrics. Thought A Lot Lyrics. Tightly Wound Lyrics. Time And Season Lyrics. Time Brings Change Lyrics. Tomorrow's Another Day Lyrics. Too Much Thinking Lyrics. I couldn't be upset about that because I think it turned out great. When I finally was brought back the band and Tooth and Nail Records weren't getting along so good. Then they all stopped calling me and I got busy with life and we didn't work together for over 10 years. Chris helps the band with their social media and is the fan club ambassador.

I'm glad to be back in contact and working with the band again. 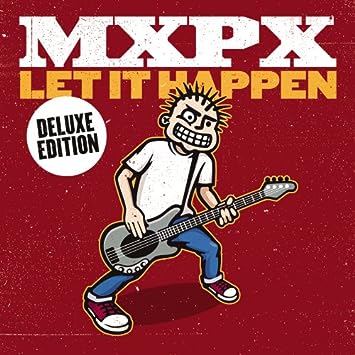 Thanks Chris! My wife and I went to see them play last month in Portland and it was really fun seeing them again. It was a great show and they were really warm and welcoming to us. My hope is that they keep making music and that once in a while I get to design something for them. That would be great. Below is the redesign of the Teenage Politics art for stickers and whatever and additionally there is a one color version of it that I did for t-shirts. I hope this was worth your time to read. I know it's a limited amount of people who are interested in my ramblings but for the few I thought it was worth the effort.

You can let me know what you think below as I've thought about doing one of these for the Tooth and Nail Records logo or for Blenderhead's album Prime Candidate for Burnout but if there is no interest then I won't waste my time. If I would have known back then that the mascot I was creating for the band MxPx would still be used 20 years later, I probably would have over-thought it and had a massive creative block.

Instead, I was having fun drawing a character for an album cover for three 16 year old punks. I just hoped it would help them sell some albums and maybe the art would end up on a few t-shirts and stickers. At the time that I was asked to design the cover I had already done a few jobs for Tooth and Nail Records like the label's corporate logo and an album cover for my buddies in Blenderhead.

I jumped at the chance to work on more projects for the new company and especially for MxPx.

I had seen them play a few times already around Seattle and knew they had something special that would carry them pretty far. Obviously I didn't know at the time how right I was or how hard of workers they were. I would have never guessed I would be writing about that first album 20 years later and that they would still be an active band. I grew up being a rabid fan of music and especially 70's and 80's Alternative Rock and Punk back when it was new. I didn't pursue playing music after a failed attempt at trumpet playing in 4th grade and some embarrassing experiences in an all-boys chorus in 6th grade.

I was fascinated by the connection between the visual art and the music though because, I was much better at drawing. Like most of us who grew up with vinyl and cassettes, I stared at the album covers while playing the music and considered the two inseparable. My heroes were as much the artists who designed the album covers as the artists who made the music. I was in awe of Raymond Pettibon because his art was so much linked to Black Flag's image that he was like another member of the band.

When I finally got a chance in my mid 20's to design art for local bands who I really liked and who were getting pushed nationally, I was super excited just to contribute my part.

For a while now I've wanted to explain certain decisions I made about the creation of the Pokinatcha Punk PxPx character and the Pokinatcha album cover. With the 20 year anniversary approaching I decided that if there was ever a time to do it then it's now. This is my longest blog post yet, but hopefully if it's interesting to anyone out there then it will be worth my time and effort.

Most of this I've never shared with anyone. It's not for any good reason but mostly because no one ever asked me. Hmm, I wonder if that's a hint. Mike Herrera had mentioned to me that he liked the album art for Screeching Weasel and I knew they had a cartoon-like character. So I tried to create an animated guy who would represent the band. As one example, think of Notre Dame. They have the Fighting Irish mascot. He is a clean, graphic mascot that represents the University and they don't change his fighting stance pose. That's the kind of idea that was in my mind when I created the first image.

I didn't and don't today consider myself a cartoonist, but drawing a logo-like character was very doable for me. If I do another one of these posts about Teenage Politics, the second album, then I'll go more into detail about my struggles with creating other poses of the PxPx. I must have thought it made them look intense. I made the PxPx smiling though, because I wanted him more mischievous than mad or in pain.

That's the only explanation I can think of for the weirdest part of my character. In my weird way of thinking I thought putting an X there instead of drawing a more complicated ear was more punk rock. It also doubled as a possible earring. I tried this again on an illustration I did for the band Shorthanded where I put an X on the guy's arm to represent a generic tattoo, but it just confused people and some thought it had something to do with Straight Edge which it didn't.

So, I dressed him like I dressed when I was a youngster going to shows. I never understood why there were so many punk kids with leather jackets and Doc Martens because I couldn't afford those things. I also wanted him to be timeless and I figured Chuck Taylors, a white t-shirt and basic shorts were going to last. Like Sand Thru The Hourglass Barbie Girl Lyrics.